‘Round And ‘Round The Christmas Tree 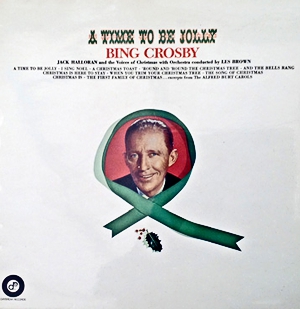 ‘Round And ‘Round The Christmas Tree first appeared on A Time to Be Jolly, a long-playing vinyl album recorded by Bing Crosby for Daybreak Records (DR 2006) at Mercury Sound Studio West on Mission Street, San Francisco. Crosby was supported by Jack Halloran and the Voices of Christmas with the orchestra conducted by Les Brown.

Four tracks were originally recorded on November 16, 1970 and the remainder were overdubbed by Crosby on September 7/8, 1971 using orchestral tracks recorded on August 31, 1971. Several tracks have the Voices of Christmas singing a few lines from the Alfred Burt carols as an introduction and these are shown in the listing. Another song “An Old-Fashioned Christmas” is thought to have been overdubbed by Crosby but it has never been released.

Bing Crosby, A TIME TO BE JOLLY, Jack Halloran and the voices of Christmas with Orchestra conducted by Les Brown, Daybreak Records # DR-2006