Que Sera, Sera (Whatever Will Be, Will Be) 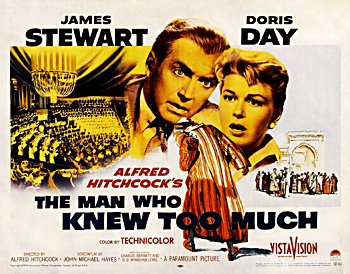 In 1955, Alfred Hitchcock was making a picture called, “The Man Who Knew Too Much” and wanted Jimmy Stewart for the lead. Stewart’s agents, the omnipotent MCA, told Hitchcock he could have Stewart only if he took another client, Doris Day, and another of their clients, Livingston & Evans, to write a song for her. Livingston & Evans insist this is the only time an agent ever got them a job.

Hitchcock didn’t want Doris Day, although he was very happy with her later. He told Jay and Ray that he didn’t want a song, but, he said, Doris is a singer, and the studio wants a song for her. He added, ”I don’t know what kind of song I want. But Jimmy Stewart is a roving ambassador and it would be nice if the song had some foreign words in the title. Also, in the picture, I have it set up so that Doris sings to their little boy”.

It just so happened that Jay had seen a picture called “The Barefoot Contessa”, and at the end of the picture Rozzano Brazzi took Ava Gardner to his ancestral home in Italy, and carved in the stone was the legend CHE SERA SERA. He told her that it was their family motto and meant “What will be, will be”. Jay wrote the title down in the dark. Later, they changed the Italian “che” to the Spanish “que” because of so many Spanish-speaking people in the world. The phrase is also “Que sera sera” in French, which may account for the song’s wide acceptance.

Meanwhile, there was a Livingston & Evans song in “The Man Who Knew Too Much” that Doris Day really liked and which she recorded (“We’ll Love Again”). However, she refused to record QUE SERA SERA because she thought it was a children’s song. But this was the important song in the picture, so Paramount insisted that she record it. Paul Weston, who was present at the recording session, said that she knocked it off in one take and said, “That’s the last time you’ll ever hear that song”.

Daily Variety and most of the smart money said that Cole Porter, because he had never received an Oscar, was a lock for his “True Love” in 1956’s Academy Awards. But to Jay and Ray’s surprise, their names were called out and they won their third Oscar for QUE SERA SERA.