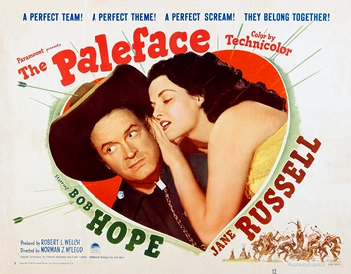 BUTTONS AND BOWS…Another assignment on their list was a song for Bob Hope to sing to Jane Russell in “The Paleface”. In the scene in question, Hope was driving a covered wagon, and, when he turned around to sing to Jane in the back of the wagon, his horses took a wrong turn and Bob, Jane and all the wagons behind them ended up in an Indian ambush. This was the only reason for the song. They wrote a song called “Skookum”, which is an actual Indian word meaning (loosely) “OK”. But much to their consternation, director Norman McLeod absolutely refused to use the song, arguing that the Indians were supposed to appear as a menace, a threat, and a comedy song about Indians would botch the scene. Jay and Ray argued that this was a comedy and a big star like Hope was invulnerable. McLeod wouldn’t budge.

Grumbling all the way back to their office, they set back to work and came up with BUTTONS AND BOWS. The song garnered them their first Oscar and, considering that if Norman McLeod had gone with “Skookum”, BUTTONS AND BOWS would never have been written, the guys re-evaluated their idea of McLeod’s musical taste.

Dinah Shore, very close to giving birth to her first child, recorded the song at three minutes ‘til midnight with the orchestra ad-libbing behind her. At midnight, a planned musician’s strike halted all orchestra recordings for a year. This was the last song recorded before the deadline.