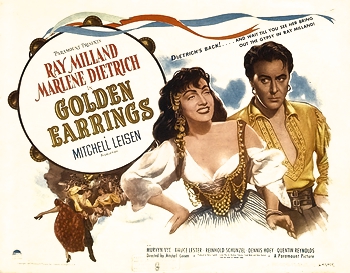 Golden Earrings is a 1947 romantic spy film made by Paramount Pictures and starring Ray Milland and Marlene Dietrich. It was directed by Mitchell Leisen and produced by Harry Tugend from a screenplay by Frank Butler, Helen Deutsch and Abraham Polonsky, based on a novel by Jolán Földes. The music score was by Victor Young and the cinematography by Daniel L. Fapp.

On the eve of World War II (1939) English officer Ralph Denistoun is in Nazi Germany on an espionage mission to recover a poison gas formula from Prof. Krosigk. He is helped by Lydia and her band of gypsies. Naturally romance develops along the way.

The film’s haunting song, “Golden Earrings”, sung in the movie by Murvyn Vye, was a hit recording in 1947-48 by Peggy Lee.