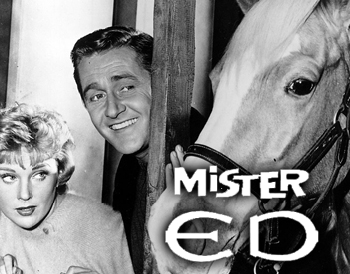 The MISTER ED show concept was derived from a series of short stories by children’s author Walter R. Brooks, which began with The Talking Horse in the September 18, 1937, issue of Liberty magazine. Brooks is otherwise best known for the Freddy the Pig series of children’s novels, which likewise featured talking animals that interact with humans. Sonia Chernus, secretary to director Arthur Lubin, introduced Lubin to the Brooks stories and is credited with developing the concept for television.

The theme song, titled “Mister Ed”, was written by the songwriting team of Jay Livingston and Ray Evans and sung by Livingston himself. The melody is derived from that of a German Romantic-era song by Emile Waldteufel. The first seven episodes used only instrumental music to open the show; thereafter the version with lyrics was used. Livingston agreed to sing the song himself until a professional singer could be found; the producers liked the songwriter’s vocals and kept them on the broadcast.

The theme song received renewed publicity twenty years after the show went off the air when Jim Brown, a preacher from South Point, Ohio, claimed in May 1986 that it contained “satanic messages” if heard in reverse. Brown and his colleague Greg Hudson claimed that the phrases “Someone sung this song for Satan” and “the source is Satan” would be audible. At their behest teenagers burned over 300 records and cassettes of secular music with alleged satanic messages. The teens did not burn a copy of Television’s Greatest Hits but Brown asserted that “Satan can be an influence whether they [the songwriters] know it or not. We don’t think they did it on purpose and we’re not getting down on Mister Ed.”