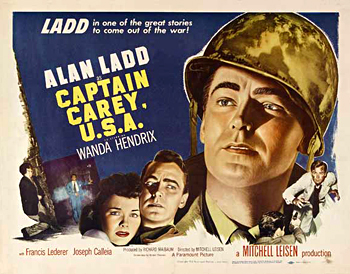 In 1949, Alan Ladd was starring in a picture called “O.S.S.” (which was the CIA of World War II). They needed a device to warn Alan Ladd and the partisans in this Italian town that a Nazi patrol was coming. So, as usual, one of the writers suggested somebody sing a song as a warning. It was a pretty unimportant assignment, but they gave it a shot. They wrote a pretty Italian-style song, figuring that the Germans would say “Ja,ja,das ist sehr gemutlich”, and Alan Ladd would say, “Let’s hide the radio and get the hell out of here”. They called the song MONA LISA.

The song was accepted, but a few weeks later, Jay and Ray were called to the front office to be told that the new title for “O.S.S” was “After Midnight”. Of course, they wanted a title song. “Keep that pretty melody”, they said, “but throw out the MONA LISA lyric and write a lyric called ‘After Midnight’”. This didn’t make the writers happy, but they dutifully wrote “After Midnight” and MONA LISA hit the dead song pile. They made a demo of “After Midnight” with the 44-piece Paramount Orchestra, which was expensive and showed how serious they were. But there was a half-hour left on the session, so Jay handed the MONA LISA lyric to the singer and asked him to sing these words to the same melody, “Just for us”.

One day, Jay and Ray picked up Daily Variety and read that the new title for the Alan Ladd picture was now “Captain Carey, U.S.A.” They rushed to the front office and said “You don’t need ‘After Midnight’ anymore. Can we have our MONA LISA lyric back”?

They thought all the Italian singers would jump on it, from Sinatra to Damone to Como. But they all turned it down. Larry Shayne, now in charge of publishing for Famous Music on the West Coast, went after Nat King Cole and never quit. Nat remembered, “I recorded that song to get that Shayne fellow out of my hair”. Capitol (Cole’s record label) didn’t think much of the song and, took full-page ads touting the other side “The Greatest Inventor Of Them All”, a religious song, without even mentioning MONA LISA. It ended up winning Livingston & Evans their second Oscar.