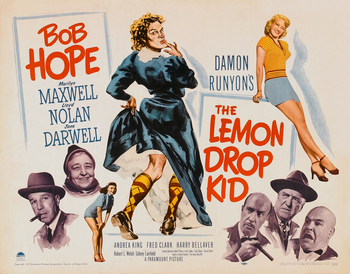 SILVER BELLS has sold well over 160 million records since Jay and Ray first were assigned to write it for Bob Hope and Marilyn Maxwell in 1950 for the Paramount picture “The Lemon-Drop Kid”. The picture takes place in New York at Christmas, and the studio wanted a Christmas song. Jay and Ray balked. “It’s impossible to write a hit Christmas song”, they said.” Every year everybody sings the same old Christmas songs, and new ones never make it”. Also, they were uneasy because they had an option coming up in their contract, and they hadn’t had a hit for awhile. But, as usual, the studio was insistent.

So, with great reluctance, they wrote a song called “Tinkle Bell”, about the Santa Clauses and the Salvation Army workers who stand on New York street corners tinkling their bells. But when Jay told his wife, Lynne, that they had written a song called “Tinkle Bell”, she asked him, incredulously, “Are you out of your mind? Do you know what the word “tinkle” means to most people”? She went on to explain it’s association with a very specific bodily function. Of course, Jay and Ray had never heard it used in that way. “Tinkle” (for “pee”) is a woman’s term. As Jay said in the act that they used to do, “When I was a boy, I said ‘Pee-pee’. Come to think of it, I STILL say ‘Pee-pee’, only more frequently”.

They put aside “Tinkle Bell” and started to write a new song. But they liked the music and melody of “Tinkle Bell”, so they just changed “Tinkle” to “Silver”, and the money’s been pouring in ever since. To give the song added dimension, they wrote the verse and chorus so that they could be sung at the same time, and even added a lyric counterpoint to the chorus.

Bing Crosby made the first record, using all these musical tricks. Jay and Ray think this helped the song get started, besides the fact that it was about the city, while most Christmas songs were about home and hearth. They also purposely put it in three-quarter time, in contrast with most other Christmas songs around.