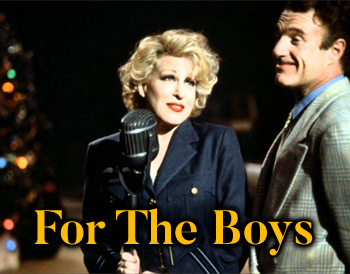 For The Boys is a 1991 film which traces the life of Dixie Leonard, a 1940s actress/singer who teams up with Eddie Sparks, a famous performer, to entertain American troops.

As in The Rose, Midler’s first starring role and also a blockbuster quasi-biopic, the film is fiction. However, actress/singer Martha Raye believed that Midler’s character was based on many widely known facts about her life and career with the USO and pursued legal action based on that assumption. After a protracted legal engagement, Raye ultimately lost the case. The Caan character was generally believed to be based on Bob Hope.