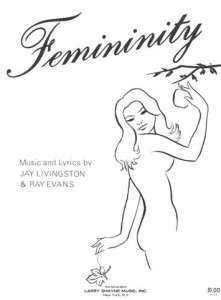 Femininity was written for the 1958 Broadway show, Oh Captain! based on the screenplay, The Captain’s Paradise, by Alec Coppel. The show opened on Broadway February 4, 1958 at the Alvin Theatre and ran for 192 performances.
The original cast included Tony Randall, Alexandra Danilove, Susan Johnson, Abbe Lane, Jacquelyn McKeever, Edward Platt and Paul Valentine.It was a Tony nominee for Best Musical 1958.
LISTEN to Eileen Rodgers from Oh Captain! soundtrack