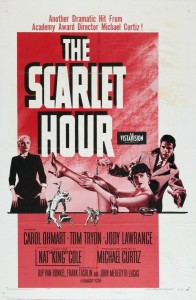 Never Let Me Go appeared in The Scarlet Hour, a 1956 American crime drama film directed and produced by Michael Curtiz. The film stars Carol Ohmart, Tom Tryon and Jody Lawrance. The screenplay was based on the story “The Kiss Off” by Frank Tashlin. It has been recorded many times by artists as various as Bill Evans, Cleo Laine, Michael Feinstein, Nancy Wilson, Nat King Cole and Wynton Marsalis.