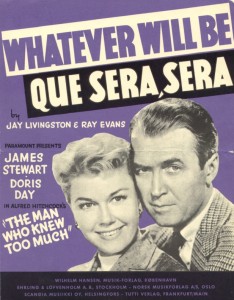 There was a Livingston & Evans song in “The Man Who Knew Too Much” (directed in 1955 by Alfred Hitchcock) that Doris Day really liked and which she recorded (“We’ll Love Again”). However, she refused to record QUE SERA SERA because she thought it was a children’s song. But this was the important song in the picture, so Paramount insisted that she record it.

Paul Weston, who was present at the recording session, said that she knocked it off in one take and said, “That’s the last time you’ll ever hear that song”. By the way, Jay and Ray won their third Oscar for QUE SERA SERA.